A request to be able to share audio (mp3, ogg etc) as well as images and video comes up fairly often. Linked to this folk were discussing setting up online radio streams last night and it could be a good way of sharing short-form content (jingles, shorter audio features etc).

Is this feature currently not present due to an oversight/lack of dev resources (and other things being more important), tech security reasons or has it been deliberately left out to avoid a potential nightmare with copyright issues and in some cases the authorities “leaning” on instance admins to censor content on grounds of copyright infringement?

Yes, this is why we have opted out of that feature.

thanks for the clarification - from my involvement in both traditional and online radio and the complexities of copyright licensing I had a feeling that would have been the case.

Such a decision makes sense as if an online service becomes known as a “copyright infringement haven”, even in democratic/“developed” countries its a very quick way for its admins to end up in very awkward situations with the meatspace authorities, more so than discussing controversial political issues!

This confuses me slightly, as copyright infringement occurs with user-posted text, images, and videos as well.

There’s nothing inherently more dangerous about audio files from a liability standpoint.

legally thats true, but the 8MB limit is less than many mobile phone cameras are capable of, and you are unlikely to get an entire Hollywood movie or a high budget TV show into 8MB.

However you could easily get a 192k MP3 of a commercial pop song into 8MB and this is precisely what the “copyright feds” are actively searching for. As an example our community radio stream in Ipswich UK is constantly monitored by an “artists rights/compliance checking” organisation based in Germany, that reports its findings back to PPL/PRS in UK.

As @DJSundog, this is strange. Domain operators should not be liable for that according to the mere conduct doctrine and various “user generated content” regulations.

What is more imporant from the operational standpoint is who is hosting those files and how they are delivered to the users. Would be really cool if those were only user-hosted files, thus - mastodon is not even a cache or proxy.

I agree with the logic of what you are saying (which is how the law should be applied and ideally how we as Europeans (or TBH anywhere else) should balance freedom of expression against copyright protection.

However my personal experience when our EDM website was hosting DJ mixes or even what happens should I use any type of music in the background of a Youtube video I make about electronics / audio processing projects is that the copyright owners operate using “guilt by association”.

Copyright owners have already managed to get Google, Soundcloud, all the video sharing organisations and other far bigger organisations to back down and implement various forms of surveilance/censorship against unlicensed sharing of copyrighted content - they are not going to give an “alternative/FOSS” network an easy time because its smaller.

To complicate matters further, creators are themselves divided about the copyright issues.

E.g. a 70 year old Schlager performer is more likely to forego their fraction of euro-cents royalties from a social media video or even overlook the track being shared as a whole and broadcast on a pirate radio station 600km away in NL because they’ve already made their living or consider music as a secondary income rather than a primary source of living (as the term “Musikant” suggests!)

OTOH a 20 year old “internet star” musician might be more likely to hustle for every last euro-cent she can get, and/or is encouraged by her management (who own the copyright) to do this whether or not she personally wants this to be the case.

There are legal frameworks for handling the disputed upload of copyrighted materials. There’s no reason for a piece of software to avoid a common mime type out of fear of what might possibly happen. This is a poor decision overall as it supports the erosion of user rights in the face of corporate threats.

If an instance operator wants to disallow various types of uploads based on content type or file size, so be it - it should be their decision, not a platform proclamation.

I was experimenting with posting torrent links there. Wouldn’t that be cool if torrent with a live player on the site would be a default sharing mode for large media (I know I’m a dreamer).

The instances should be burdened with hosting those media, it will be discouraging to host ones in the end. Some folk are already pushing user-provided images to CloudFlare

That also explains why all videos you upload get converted into gifs (ok, maybe they’re not gif behind the scenes, but there’s no audio track). YouTube is very popular with music “videos” where the image content is a static picture of the album cover. Converting to gif prevents that.

you can absolutely post videos (with intact audio) to mastodon

You are correct. I tested by uploading a video through Amaroq and then trying to play it back. Amaroq just plays them muted: when I loaded Mastodon in Safari, my test video had its audio intact.

This means that I can go upload a 1x1 video to share any audio tracks I made.

please let me know how this works out!

I convert with ffmpeg to a 1 frame video for maximum audio length. With a bigger picture (320x240), the user has space for controls (like the mute & pause). I do this for my silly #NameThatTune game and also with original content, and get about 2 minutes of decent mp4 audio on a static image. 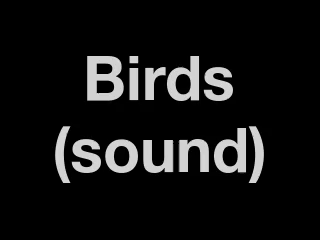 There are some constraints put on the .mp4 file for it to be “acceptable.” I don’t know what they are, but I found that this works:

Where label.gif is some small image that will display in Mastodon, best at 320x240.

I also render label.gif with ImageMagick to put text up there, but it gets complicated, too messy to post here.

I don’t have a particular interest or need for audio posting, but I’d much rather have the option than not. Mastodon shouldn’t be worried about what I do with the tools, if my users turn into pirate distribution wizards, that’s on me.

I would like to see more audio and video sharing through federated networks. But I have no need to have it via mastodon available.
I would prefer having it within a network posted where mainly audio/video is shared and organized. This makes it easier to access the content you’re looking for. …but shure there also could be a filter function for just showing toots with video files.
But also there is already a federated network for video/audio sharing and it could need some more support. It’s called MediaGoblin. Would be nice if there would sharing buttons for mastodon and co embeded.

Isn’t a reverse true? All animated gif are converted to videos to save space…