Over on the social.coop Loomio board, a member raised the question of content licensing toots, and what license would be appropriate as a default for our instance—e. g. public domain, CC BY, etc.

Currently we see many media outlets embedding public tweets in articles they make money from; Twitter’s new terms of service seem to permit that explicitly. Many users don’t like the idea of other people using their content a) without permission and/or b) to make money. However, others embrace the idea of “free culture” and want as few restrictions as possible.

Does anyone else have thoughts on the practicality or feasibility of a “default license” option for instances or individual users?

I am going to share my opinion. Everything I produce on my own (including my Mastodon messages) is dedicated to the public via CC0.

For software I am a copyleftist, because code can be obfuscated and I believe we need protections to ensure software remain accessible to future users. But copyleft is a form of copyright, and that means it is backed by a state willing to enact violence to enforce it (to clarify, I consider being sued or sent to jail to be an act of violence).

Aside from CC0, I can personally contribute to content projects that are licensed under CC-BY and CC-BY-SA. The reason is not because these are common sense decisions to share knowledge (though of course it is), nor is it a dedication to free culture (applicable as well). It is because I can’t be bothered to enforce copyright, and it would be a lie if I threatened people with legal action; I am never going to use a government institution to hurt a person because they decided to “use” something I created.

So there is a practicality there. Even if you don’t share my feelings about state-sponsored violence, consider the alternative of full copyright: does your instance collectively enforce it for individuals? Is it up to each individual to enforce their own (I am aware of social.coop, so that seems odd, ne?)? Is anyone going to fight a fair use battle with a corporation that has actual lawyers on staff?

I know this is hard stuff for folks to consider. Once I decided to not deal with copyright anymore, my life got a lot easier.

I would go with CC0 or CC-BY; that is my professional recommendation as a webcrafter and free culturalist.

I would go with CC0 or CC-BY; that is my professional recommendation as a webcrafter and free culturalist.

This is how I release my own creations. Permission culture sucks, and I don’t want to be part of it.

As far as Twitter and Mastodon go, Twitter’s T&C don’t seem to be a lot more problematic than any large service. They ask a lot because, legally and technically speaking, that’s what they need to distribute, store and serve your content. It’s not nefarious, it’s necessary in a litigious world. They’re not stealing content so much as making a case that they are more valuable because you, the user, use their network.

Mastodon’s need for a T&C is wildly more problematic because of its federated nature. You get one rogue instance and all your carefully worded assurances are worthless. I think it’s better served with a very blunt and simple “We care, others might not. Consider this when you post.”

Using their content a) it ensures free usage of tooting, not locking in and providing a profit incentive to tooting. b) it prevents exploitation of this freedom. Examples: I can take an interesting toot and write a free article about it, released under the same license. Good! I can’t take an article and put it on Buzzfeed, where the license is incompatible. Nobody wants their tweets on Buzzfeed, and companies shouldn’t be able to make money on us being social together.

In response to maiki, I think using the state against itself is brilliant, and when the state is dead we’ll no longer need copyleft : )

Here’s a general defense of copyleft from RMS.

Again, rogue instance admins completely break the concept. One person on one instance with a different T&C page is going to completely destroy the idea of copyleft, and it’ll end up on Buzzfeed anyway.

Better, IMO, to tell the users that once they hit the Toot button, that content may become public forever. I have similar wording on my model release, with a checkbox for the model to indicate “I know how the internet works”. =)

Again, rogue instance admins completely break the concept. One person on one instance with a different T&C page is going to completely destroy the idea of copyleft, and it’ll end up on Buzzfeed anyway.

I wanted to speak to the concept that copyleft keeps content from being on Buzzfeed: it does not. That is not what copyleft is for, it is used to keep information in the open, rather than secret. I only know enough about Buzzfeed to know it distracts humans with gossip and clickbait, but nothing about it seems like they would violate an attribution clause.

There is also the issue of fair use. As odd as it sounds, may I recommend the Twitter Fair Use support page. I don’t think fair use invalidates the concern for a default license, but it does point to the practical difficulties of trying to “protect” content from use by other parties.

At some point you have to ask, is putting effort into this of any worth? The more you try to lock down your content, the harder it will be for internet collaboration. It won’t even register for most companies a given user despises, and since they have billions of pages of content, if they get a notice from someone they will just change the content, but only if they are contacted, which means enforcing copyright is someone’s job.

@nev is the loomio discussion public? Is this thread useful to that discussion?

At some point you have to ask, is putting effort into this of any worth?

It’s so odd that you agree with me while sounding like you’re arguing against me.

I feel strongly that a Free Culture certified license, which includes Copyleft Copyleft licenses, would be in the communities’ best interest: 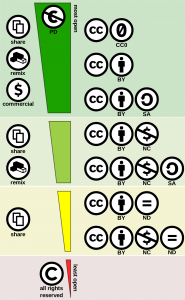 Creative Commons provides a range of licenses, each of which grants different rights to use the materials licensed under them. All of these licenses offer more permissions than “all rights reserved.” To help show more clearly what the different CC...

I think this would be something worth adding as a feature in Mastodon (see mockup), and pushing the fediverse to support it as a field in the federation protocol.

I think this would be something worth adding as a feature in Mastodon (see mockup), and pushing the fediverse to support it as a field in the federation protocol.

If we’re going to do it, I think we should leave it to the instances to set a local policy. Let them set their own rules. If every user sets their own, how will it be shown to other users, how will they be educated to know what it means, to be replicated etc?

The posting interface is already cumbersome enough for users. It’s a hindrance to new user takeup. Adding more options, and explaining them, never mind making them obvious during federation and viewing, is going to be a serious hurdle. And then what happens when a rogue instance simply ignores this metadata or doesn’t bother adding it to their template?

What about adding it in the settings/preferences and allowing instances to set a user default?

Users that are interested in either more permissive or more restrictive licenses could go into the setting and those that don’t care that much about the specific license and leave the default.

While I agree that license enforcement would be a big problem in itself, setting clear expectations/permissions could help avoid going against an author’s wishes, Cooperating agents would be in a better position to respect the author’s wishes and this would be especially important in instances that allow larger toots.

Also, a counter-argument would be that most people would consider any use of toots to fall under fair use doctrine. So it might be pointless in the end to have a license in the first place.

because so many people like to believe that by putting their content in the public domain, they serve “the public”, while in fact, they serve the corporations first.

That isn’t accurate. I am unconcerned by what corporations do with my content. They can take my best toots (and there are many, many hilarious ones!) and print them on Facebook sweaters and charge $75 a piece for them. I don’t care.

I use CC0 to encourage reuse and is my contribution to building the commons.

I am responding to that specific line, because it sounds like you are implying I don’t understand what I am doing, or there is a certain level of naiveté on my part. Perhaps there is, do naive people realize they are such? But I am not personally interested in participating in copyright law, and CC0 is a tool that allows me that luxury.

If I do seem naive from your view, then you seem jaded and paranoid. I don’t actually think you are, it is just that we aren’t that different. I am not trying to support the patriarchy and corporate monsters. I just don’t want to waste my effort in a domain that doesn’t have any real returns at “winning”.

Regardless of how/if a license chooser is implemented, it probably won’t be any more efficient at doing its job than tagging a license in the bio line. And mine will always be #CC0.